Born in Queensland Australia on a small cattle farm, Dan James first began his lifelong passion with horses at six weeks old.  The family milking goat would suffice until he got his first pony.  Starting his first colt in his early teens sparked his hunger to understand more about the horse’s thinking patterns.  After studying at Longreach Pastoral College, James began traveling the world to gain a better understanding of horses.  James first traveled to Hokkaido, Japan to start horses, then to Celina, Texas working for cutting horse trainer, Punk Carter, and back to Australia to work on a cattle station in Western Australia.  It was on this ranch that James met his Quarter Horse stallion, Ari, and Stockhorse mare, Amelia.

In 2008, James joined his good friend, Dan Steers, in Western Australia at El Caballo Spanish Horse Centre where they performed together each weekend in the “Dan and Dan Show” developing their horsemanship techniques.  In 2009, Steers and James relocated to New South Wales and Double Dan Horsemanship was born leading both young stars down the Pathway to Liberty.

In 2008, James was recognized as a world class colt trainer when he won the “Way of the Horse” at Equitana Asia Pacific. In 2012, James wowed judges again with his incredible training techniques winning the coveted Road to the Horse International Colt Starting World Champion title.

James continues to push the limits of horsemanship and entertainment with eye-opening clinics and exhilarating performances.  Helping horse enthusiasts expand their knowledge and understand for the Love of the Horse.

I grew up on a 30,000 acre cattle station in Australia located near a town called Injune, QLD. Horses were a essential way to gather cattle and thats where my interest in horses began. Much later I found myself riding bulls on the coastline of QLD which then lead to a job in the "Australian Outback Spectacular" show located on the Gold Coast. Shortly after spending some time performing in this show I was taken on by "Double Dan Horsemanship" where I have been training and traveling through out the United States of America and Canada furthering my horse skills. Just recently I have been establishing "Hancock Horsemanship" to further my learning and to share what I have already learnt. 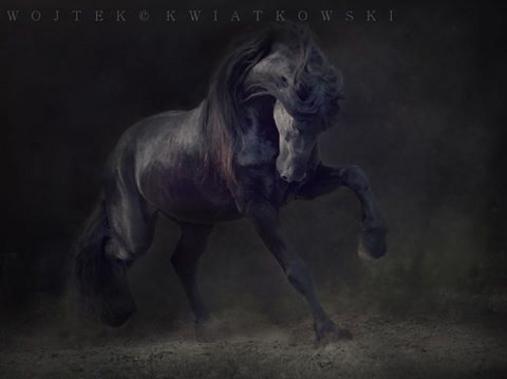 Chantal is a born artist and equine performer with class!!! She has been highly acclaimed in every accomplishment she did. Her debut in television commercials, stunt double, performance act on stage, TV series and Equine Expos all across the world has really branded her style. A great
personality with Passion and Compassion for every soul she touches. From her youthful years Chantal found her natural ability and talent to communicate with animals and teach them tricks. Chantal with her warm energetic personality became a high performance stunt lady in many movies. She also developed her own artistic, acrobatic dance performance for The Alain Choquette Magic Show. For many years she performed on stage as his partner at prestigious places like the Cesar Palace in Las Vegas. Her passion for animals returned as she
developed herself as an acclaimed educator, performer and Trainer with the Tommie Turvey Equine Extremist.

She was a co - performer at all major equine Expos throughout Canada and the USA. Her talent continued as she starred in the Walking Dead Series and Underground as an actress, stunt performer and equine co-coordinator.

To her attribute Chantal was also one of the trainer for the highly acclaimed Budweiser Clydesdale Super Bowl Commercial 2013
.
Chantal thought high performance to the horses of the commercial. Chantal is currently operating from the beautiful Equestrian Community in Ocala, Florida. She now travels to offer training programs and seminars. Chantal teaches horses and owners the way to achieve trust and respect. Her goal is for them to find Peace, Harmony and Balance.

Patrick King was very fortunate to grow up riding and competing with many breeds of horses in various disciplines. He’s just as comfortable flying over a jump, driving a team of drafts, or roping and sorting cattle as he is starting colts and riding canter pirouettes in the dressage arena. Early on, though, a horse came into his life that wouldn’t put up with inadequacy on the part of the human.  A challenge from this horse threatened Patrick’s life and sparked a new journey that didn’t involve ribbons.

His was set on a quest to find true horsemanship… Since then, Patrick has been fortunate enough to make friends and spend time with some of the industry’s top horsemen… immersing him into classical horsemanship, natural horsemanship, and just plain good horsemanship.  Patrick has also spent countless hours studying the work of the old masters.  Being offered the rare opportunity to spend extended time living and learning with master horseman Ray Hunt and his wife Carolyn catapulted Patrick’s horsemanship.  It became a simple way of life to have a ‘real job’ for each horse, even from the first ride.  Horsemanship turned from a ‘practiced science’ into a ‘living art’ under Ray’s watchful eyes and priceless guidance.

Like you, Patrick seeks to be an eternal student of the horse and the horsemen that have come before him – and he feels it is his duty to share the knowledge that he has gained along his journey.  Throughout the year, he travels around helping people and their horses through his clinics, camps, workshops, and expo demonstrations.  His students are of all levels and disciplines, from Grand Prix Dressage riders to more casual riders that aren’t interested in competing but are still very serious about their horsemanship.  What Patrick teaches is not so much an exercise or drill, as so many other clinicians and trainers teach, but a feel.  It’s a feel that becomes a connection and a synchronicity of two minds and two bodies, the horse and the human.

About Redha:
With over 30 years of professional experience, Redha Gharsa is a respected horse trainer, dedicated instructor and passionate horseman. He earned his second degree equestrian certification in Algeria before competing internationally for the National Show Jumping Team. After winning top honors at several Grand Prix events, Redha moved to the US to continue his professional equestrian career.

Redha’s expertise followed him into headlining the World Famous Lipizzaner Stallion Show. For the next 10 years, Redha trained horses and riders to preform dressage and airs above the ground maneuvers for large audiences across the US, Canada and the UK.

For over 10 years Redha was the Head Trainer and Stable Department Manager for Medieval Times in Buena Park, CA. He continued to develop young horses through the FEI, High school, airs above the ground and Alta Escuela levels. He is also well versed in liberty and trick training that has captivated audiences every evening during the Medieval TImes shows and during their annual Rose Parade and Las Vegas exhibitions.

Outside of shows, Redha continues to help numerous fellow professionals, adult amateurs and young riders through his unique and thorough teaching methods.

Be sure to check here and our Facebook page often to stay up to date with all of the exciting clinics Transitions proudly hosts throughout the year!

Colton Woods is dedicated to educating horses and people with a lifetime in mind. Colton has been blessed with the opportunity to work with and be recognized by accomplished horsemen and women who have been positively impacting the equine industry for decades as one of the hardest working, dedicated and passionate horsemen of his generation. Through Colton Woods Horsemanship, he fosters a culture where all ages, experience levels and disciplines can come together to learn, encourage, inspire and share their learning curves and victories while always keeping the horse the highest priority.

With a passion, firm belief in the importance and ability to teach a strong foundation to both horse and rider, Colton is sought after for Colt Starting, Problem Solving, Handling of Young/Uneducated Horses, Advancing Performance Horses as well as Teaching Clinics. His passion for the Vaquero style horsemanship is evident throughout his horsemanship and has influenced the path of Colton Woods Horsemanship greatly. With his own personal horses, Colton's goal is to educate each horse to be confident, responsive, versatile and capable of getting any job done around a ranch while 'Straight-Up' in the Bridle. Being 'Straight-Up' in the Bridle is seen as a 'finished' horse of the highest education within the traditions of Vaquero horsemanship. In order for horses to have reached this level they would have successfully graduated from the Snaffle Bit, Hackamore and Two-Rein prior to being 'Straight Up' in the Bridle.